A 5-year-old from Ripon has received a reply from 10 Downing Street after creating his own ‘medicine drink’ to help those suffering with Covid-19.

Edward Rushforth, who is known by friends and family as ‘Bear’, decided he wanted to help those affected by the virus and so created a recipe for a ‘medicine drink.’

With some help from his mum, Hannah, Bear got to work on sending his recipe to UK Prime Minister Boris Johnson.

And before long, Bear received a letter from 10 Downing Street thanking him for his efforts, along with the Prime Minister’s own recipe for cheese on toast! 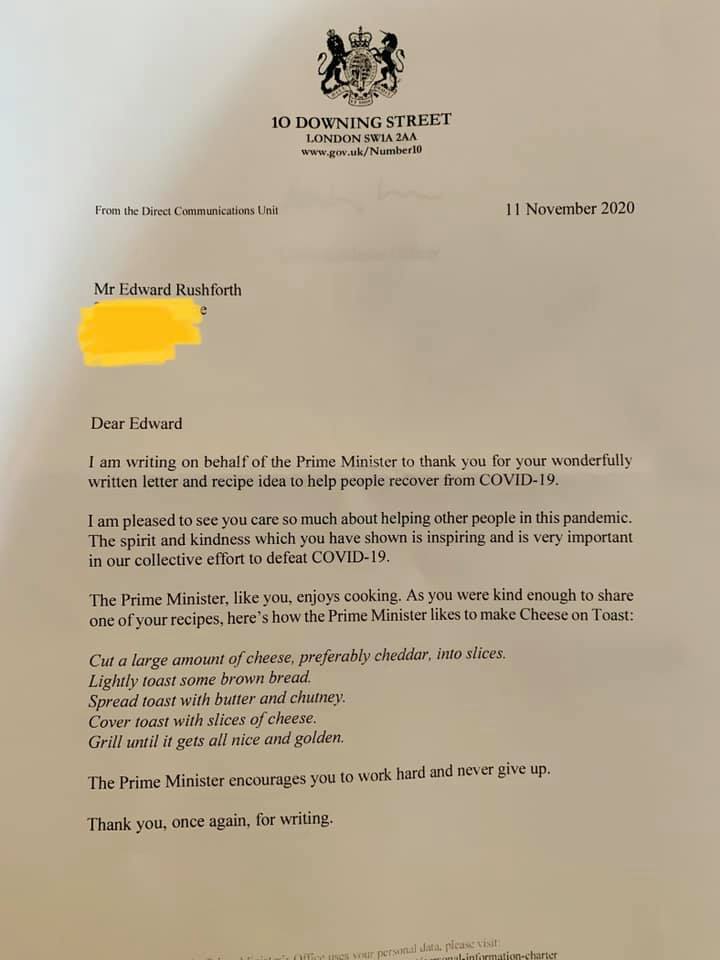 Bear received a reply from 10 Downing Street, including the Prime Ministers recipe for cheese on toast!

Bear’s mum Hannah told us how he came up with the idea for the medicine when walking home from school:

“We talked about how we didn’t know if we were going to be able to spend Christmas with family this year, and he’s really understood everything around Coronavirus – the germs, not touching things and not touching other people.

“Then he just said that he was bored of Coronavirus, wanted it to go away and wanted everyone to be better! He suddenly announced ‘I know what will make everyone better, my special drink!’ When we got home he went out into the garden and searched for ingredients.

“He felt he just had to tell the Prime Minister about it.”

The recipe, which Bear created and tested by himself, included a number of ingredients including dill, mint and lemon – a culinary creativity that Hannah puts down to him being the son of a chef!

“Dill is his dad’s favourite herb, so we have it in quite a lot of stuff and he’s quite familiar with it. He wanted to add edible flowers but understood that it’s probably the wrong time of the year!

“We do a lot of cooking with the boys at home, they’ve always been around cooking and baking – he’s actually a really good cook and he loves doing it! 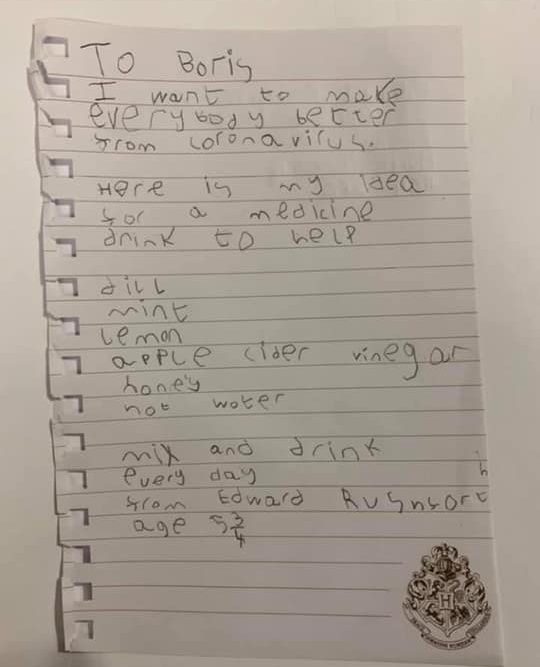 Hannah filmed Bear’s reaction, which can be found on the Your Harrogate Facebook and Twitter pages, and he was understandably amazed to hear from Downing Street:

“I gave it to him and his face was just genuine amazement, it was so lovely and he was just absolutely chuffed to bits.

“He’s got such a big heart and is such a kind little boy, we’re so proud of him. When he told me why he wanted to do it, he said he just wanted to be able to give grandma and granda cuddles again.”

Well done Bear and best of luck with your medicine drink!