Protestors have returned to the Labcorp site in Harrogate to protest against animal experimentation.

The demonstration has been attended by Vivisection Exposed – an active animal rights group opposed to animal testing, whether it be for cosmetics, pharmaceuticals or weapons.

The group of around ten people gathered outside Labcorp on Otley Road, a contract testing laboratory which carries out laboratory tests for other companies.

The protestors wrote slogans on the road in chalk and held up banners donning phrases such as ‘the harming horror of Harrogate’, ‘end animal experiments’ and ‘animals are here with us, not for us.’

81-year-old Annabelle, who has been travelling from Easingwold for 30 years to protest, said:

“I’ve never come across such fraudulency regarding science. If you are mutilating dogs, it’s irrelevant.

“I have a placard that says ‘traitors’ and a traitor is someone that betrays the nation. It is wrongdoing on a massive scale.” 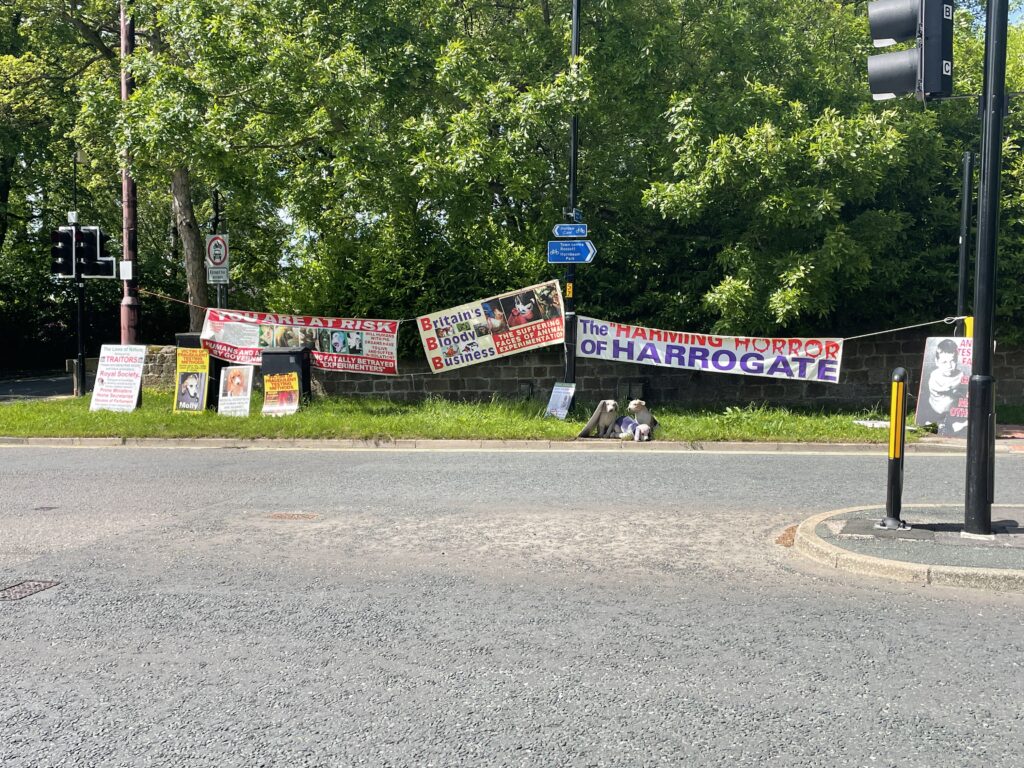 Banners at the animal rights protest on Otley Road.

Another protestor, who wished to remain anonymous, said:

“It’s 2022 and people are dying because they’re looking at animals as the same as us. We’re similar to a point but we dramatically differ and that skews the results.

“I’ve been coming since last year. We came on Christmas Day, so it’s known to some people but not everyone in Harrogate.”

“In 2022 places like this shouldn’t be open. They should be in the history books.” Banners hanging from the gates at Labcorp.

Labcorp argue that the tests are necessary for scientific development to combat diseases in humans.

A spokesperson for Labcorp said:

“In addition to being the right thing to do, the proper care of research animals is fundamental to sound scientific research and the ability to develop life-saving and life-enhancing new medicines for cancer, deadly infections, heart disease, leukemia, diabetes, Alzheimer’s, multiple sclerosis, cystic fibrosis, and many other disabling diseases.

“New drugs must be tested in animals before human clinical trials to ensure the safety of patients and volunteers and there are clear links between excellent animal welfare and medical breakthroughs.”