Masterchef winner Eddie Scott and Yorkshire Shepherdess Amanda Owen are set to line up alongside a host of well-known regional chefs at this year’s Great Yorkshire Show.

The Great Yorkshire Food Theatre will feature more than 20 chefs, including Callum Bowmer of Horto at Rudding Park, Michelin-starred Shaun Rankin of Grantley Hall near Ripon and Nathan Richardson-Kelly of Castle Howard.

Dishes being demonstrated range from steamed rhubarb muthiya to halibut and from chicken pancakes to slow roasted beef.

MasterChef winner Eddie will appear on Tuesday (12th July), marrying his Punjabi family heritage with a love of French cuisine, using ingredients from the Yorkshire Wolds and coast near his home.

Shepherdess Amanda shares some of her favourite family recipes from her bestselling book ‘Celebrating the Seasons’ on the Friday.

“We’re thrilled to be hosting some great names who between them exude incredible talent showcasing the best of Yorkshire’s culinary scene.

“It’s a great coup to have got Eddie to appear on his home turf so soon after his MasterChef win and he joins a brilliant gourmet line-up oozing passion and skill.” 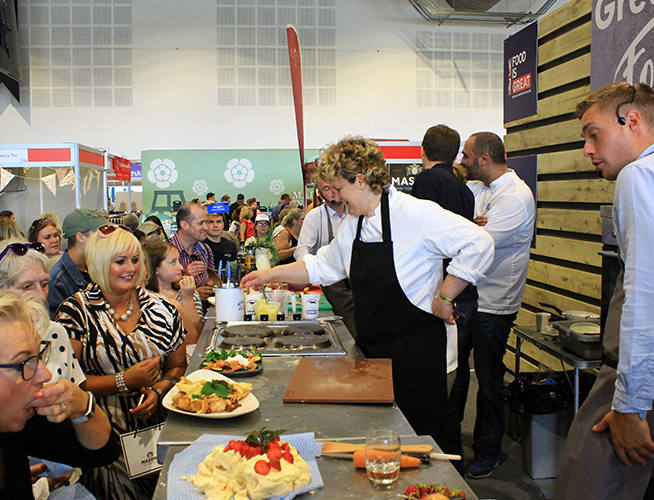 The Game Cookery Theatre makes the most of Yorkshire game, including venison, pigeon, grouse and rabbit.

New for 2022 is an appearance by Year 8 students from St Aidan’s High School in Harrogate who have won the opportunity to cook at the show, with two different forms producing their own game pizzas.

“It is fantastic to have a full programme at the Show again. We have some new chefs and some young chefs and as always we will be showcasing the very best Yorkshire produce in both theatres.”

Eddie Scott is in the Great Yorkshire Food Theatre on Tuesday 12th July at 2pm and Amanda Owen will be there on Friday 15th July at 2:30pm.

The Great Yorkshire Show has become a four-day event after a raft of changes were implemented at the 2021 show due to Covid 19 regulations.

Tickets are on sale now at: https://greatyorkshireshow.co.uk/ticket-information/