Harrogate’s Naughty Elf has made his return to the North Pole having wreaked havoc around Harrogate for the past two weeks.

Harry the Elf was part of Harrogate BID’s (Business Improvement District) campaign to get people into Harrogate town centre and supporting local businesses.

And now it seems his mischief is over as he has returned to the North Pole in preparation for the big day!

The Naughty Elf kicked off his visit to Harrogate at The Yorkshire Hotel – getting himself stuck when helping the hotel with their Christmas lights!

Luckily the fire service were on hand to get him down… 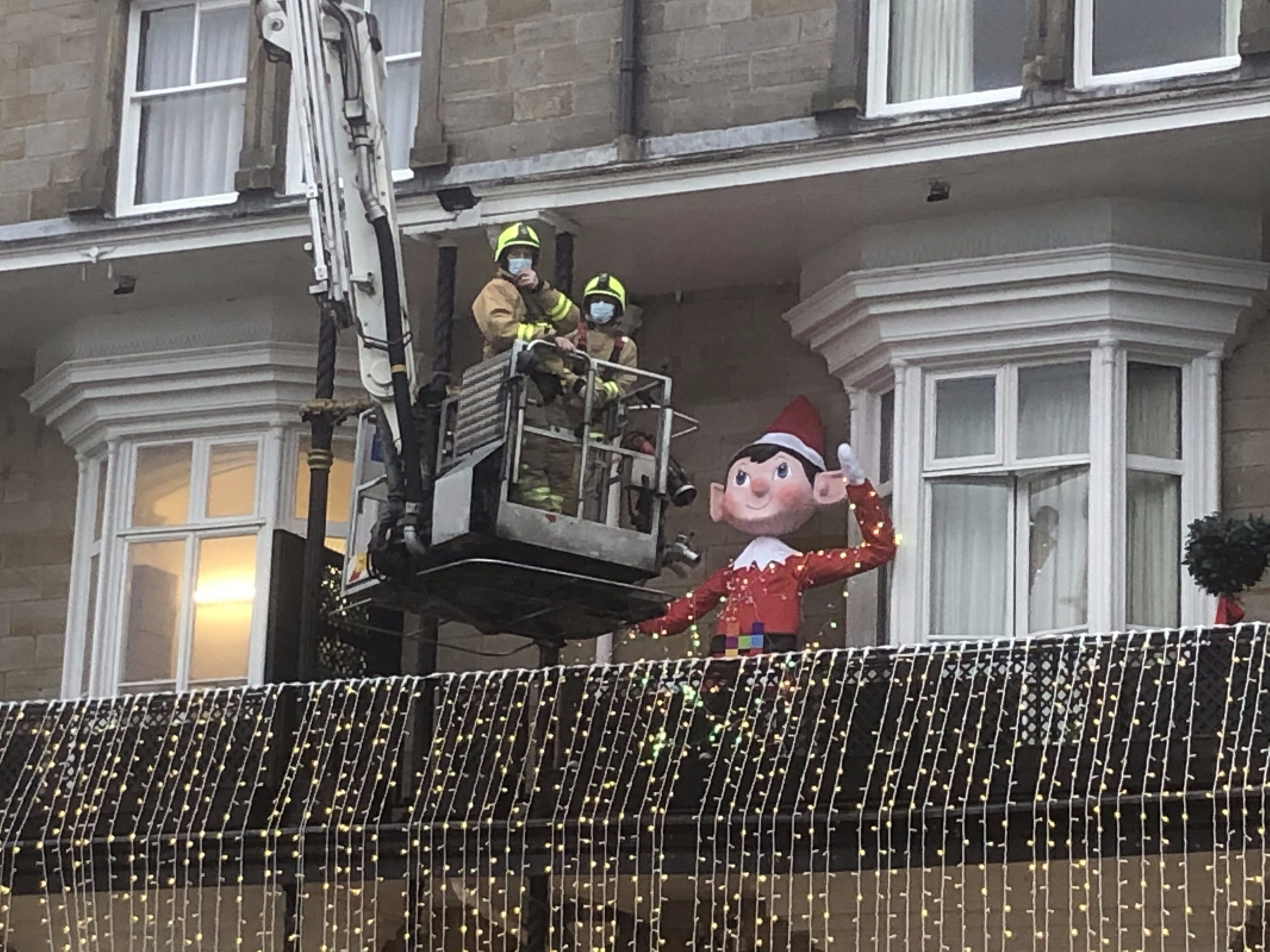 The Naughty Elf got himself stuck in the lights at The Yorkshire Hotel before being rescued by the fire service!

The Naughty Elf must’ve fancied a coffee, as his next destination was Cafe M in Harrogate Town centre!

We sent Nick to find out what he’s up to, but he couldn’t find him…

They say you can’t come to Harrogate without visiting Betty’s, and it seems the Naughty Elf shared that thought!

The Naughty Elf’s next destination was the Spirit of Harrogate on Montpellier Parade as he sat sipping a rather large cup of Rhubarb gin!

A central location for people to spot on their way into town, there were plenty of elf-ies this day!

It’s the cheeky #HarrogateElf enjoying some rhubarb cordial! You might just recognise the #Harrogate store behind him 😉 pic.twitter.com/XtKYBXtB8c

After a short break in which he returned to the North Pole (or so they say…), the Naughty Elf returned to mess around with the sign at Everyman Cinema!

Having jumbled up the letters, the elf posed for photos whilst chomping on a big bag of popcorn.

The mischievous elf rearranged the lettering at Everyman Cinema whilst eating popcorn!

Who can resist visiting Primark during the festive season? Certainly not the Harrogate Elf!

He was spotted in a ‘prime’ location within Harrogate Town Centre with less than a week until Christmas Day.

Can you spot the #HarrogateElf? He’s certainly in a ‘Prime’ location today…

He’s been getting up to mischief switching the labels on the presents in @primark’s front window & we need your help to guess what’s in them.

The Naughty Elf returned to the Victoria Shopping Centre for some Christmas music and it looked like he worked out how to untangle the Christmas lights!

He was spotted dancing away in the Piazza opposite Harrogate Train Station and was quite the spectacle when it got dark on Sunday evening.

Loving the disco #HarrogateElf. Though we’re slightly concerned he’s lost his hat with all his partying! pic.twitter.com/Z2PUt9KBfR

On his penultimate day in Harrogate, the Naughty Elf snuck into Harrogate Theatre and it looks like he got into the pantomime prop box!

Have you popped in to see the @BidHarrogate #HarrogateElf yet?

The Panto Box has been opened and it well and truly feels like Christmas 🎄 pic.twitter.com/VXhoFO7jNX

And if the Naughty Elf wasn’t mischievous enough – he ended his stay in Harrogate by robbing a bank!

The #HarrogateElf is sitting pretty with his swag bag. Have you spotted any of his dropped money around town?

Today is the #HarrogateElf’s last day in #Harrogate, so don’t miss out on a visit to his most recent adventure, or ‘Yule’ be sorry.#HarrogateElf #Christmas pic.twitter.com/UGQhEzo9VF

And that was it for the Naughty Elf’s visit to Harrogate this December!

If you caught a sight of him and tweeted a s-elfie using the hashtag #harrogateelf, keep an eye on the Harrogate BID social channels as they’ll be announcing the two best photos to win £100 Harrogate gift cards!