Fair trade shop Artizan International have opened their doors on Oxford Street, bringing a blaze of colour and culture to Harrogate.

Artizan offer crafts made by different abled people in the UK and from Ecuador and Peru, and hope to raise awareness of the challenges faced by disabled people across the world.

Having previously run weekly craft sessions for adults and children based in Bilton, this new central location is providing the charity with a new range of fundraising options with a great presence on the high street. 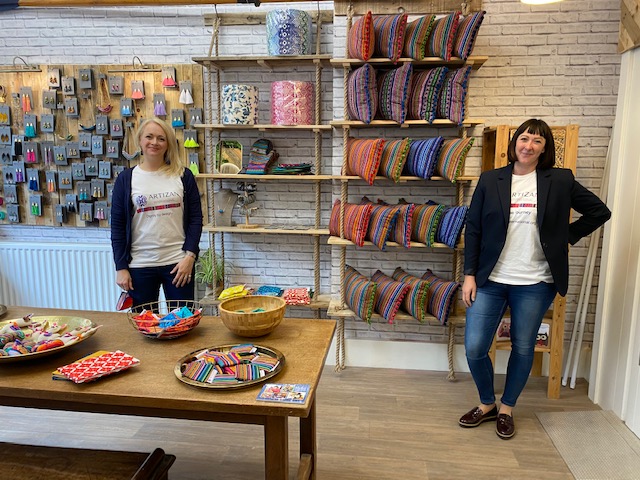 Located on Oxford Street, Artizan International’s new premises boast a retail outlet on the ground floor, a craft training area on the first floor and their offices on the second floor.

Juggling the new shop development along with their existing work has been a huge challenge over the last few months, but one that is finally paying off according to Managing Director at Artizan Susie Hart MBE:

“We had to swap from face to face craft sessions to video tutorials and zoom get togethers, sending out over 100 craft packs a month to keep people going.

“Alongside this we also have teams out in Peru and Ecuador, all of whom had to stop their craft production during their lockdowns, resulting in them having no income.

“This also presented us with another problem needing the goods they make for the new shop, but thankfully the local community have pulled together with groups like the Harrogate Scrubbers sewing for us.It really has been an overwhelming experience.”

Whilst initially just a retail outlet, the charity plans to open a café as part of the shop in the new year, staffed by people with hearing disabilities.

Their goal is to change the perception of people with disabilities and prove that they can make just as important a contribution to society, helping them gain their own independence.