He’s a much-loved familiar face in thousands of homes across Yorkshire, and on his final day as presenter of the BBC’s Look North, there was a very special surprise waiting outside the studio doors for Harry Gration MBE – a bus named in his honour!

Harry had become familiar to many as the voice of The Harrogate Bus Company’s premium 36 bus, with his warm Yorkshire tones announcing bus stops and customer information throughout the route between Leeds and Ripon.

And as Harry prepared to make one last appearance on the famous red sofa before retiring a day before his 70th birthday, the bus operator revealed its own very special surprise at the BBC’s Leeds HQ – a 36 bus named in honour of the veteran TV newsman. 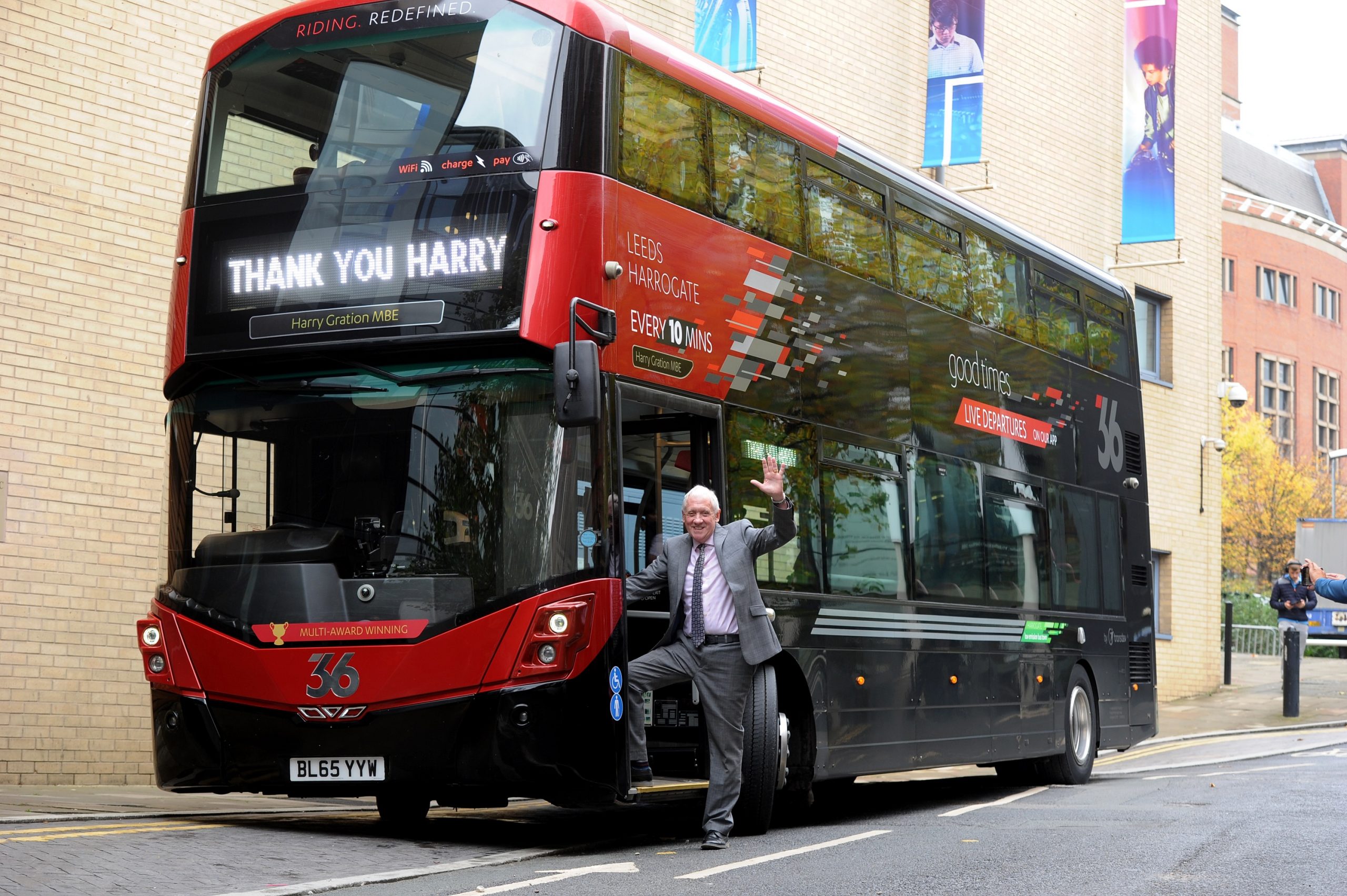 Harry Gration MBE poses with the 36 bus, which is now named in his honour.

Harry’s bus was driven amid tight secrecy to the BBC’s Leeds studios on St Peter’s Square, just a few yards from Leeds City Bus Station, where the 36 route begins its journey north to Harrogate and Ripon – and for once, the ever-popular TV host was momentarily lost for words as the bus proudly displaying his name was revealed for the very first time!

“When we heard he was retiring from the BBC, there was only one thing to do – to name a 36 bus in honour of this proud Yorkshire favourite. We’re delighted to be able to pay our own tribute to a man who’s done so much to promote his beloved White Rose County on and off screen, and we all wish Harry a happy and healthy retirement.”

“Our familiar 36 buses are packed with luxury features, from quilted leather seats and superfast Wi-Fi to aircraft-style LED lighting and even an on-board library, but we knew they still needed a finishing touch to make them truly Yorkshire – and that’s where Harry’s voice came in.

“Harry also hosts our annual Transdev Amazing Awards, which salute the great work by our teams right across the North of England, and he tells us that he’s recognised at least as much as the voice of the 36 as the host of Look North!” 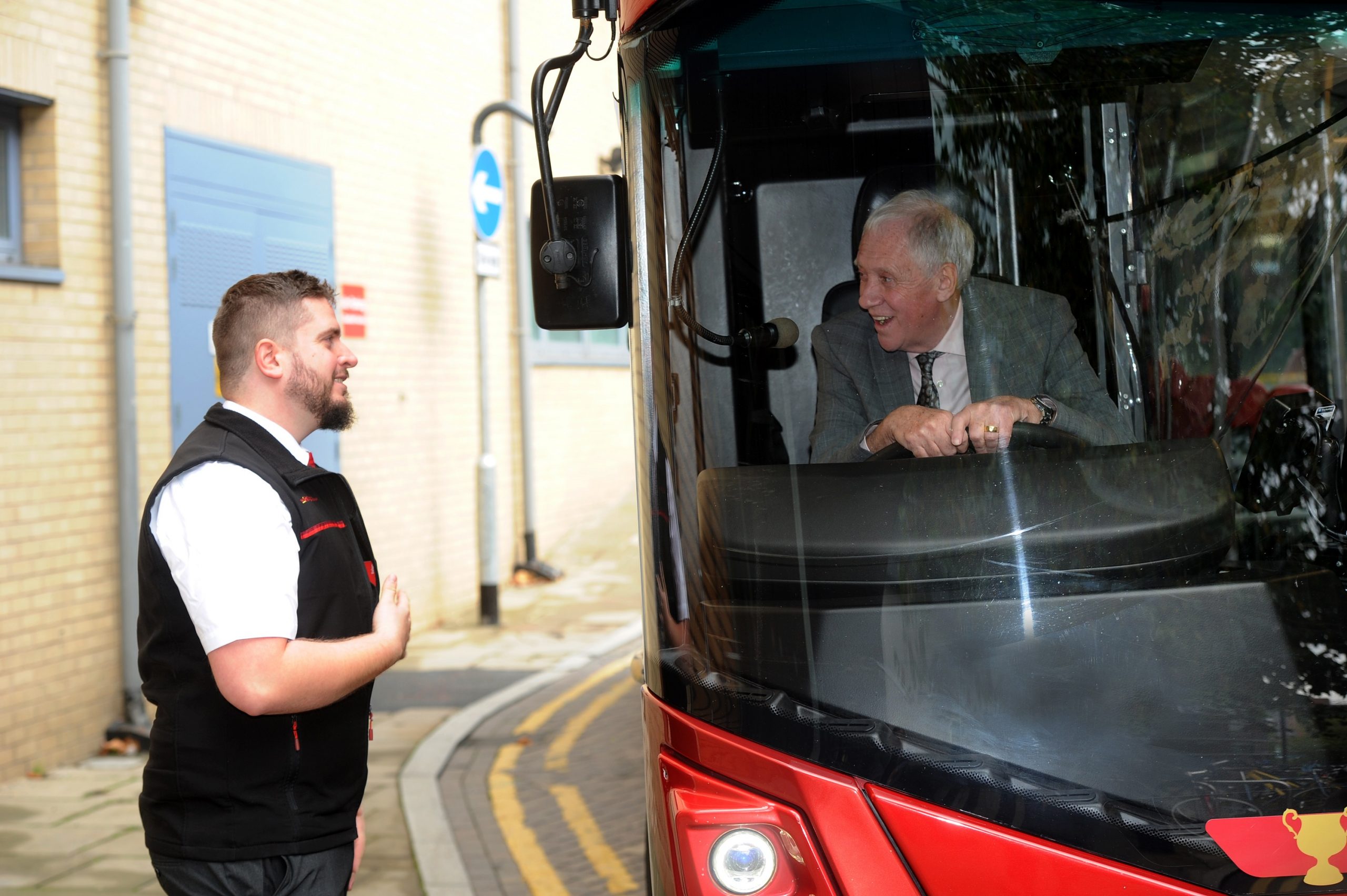 Harry Gration sits behind the wheel of the 36 bus, which will travel between Harrogate, Leeds and Ripon.

Bradford-born Harry began filing rugby league reports for the BBC while working as a history teacher in the mid-1970s, before joining Look North as its presenter for much of the last 38 years. Harry was awarded the MBE in 2013 for services to broadcasting: his co-presenter Amy Garcia will continue as Look North’s lead presenter.

“What an honour! The number 36 bus was a bus I used in my youth and now one’s named after me. And I’m still alive!

“Thanks so much to Transdev. I’ve worked with them for several years now and they’re a wonderful company, with an amazing team.

“It’s been a privilege to meet the people of the county I love in my years at the BBC. I’m looking forward to some new broadcasting adventures, and special time with my family and a certain one-year-old.”

Harry’s own named bus is now in service on the frequent 36 service between Leeds, Harrogate and Ripon, alongside another bus named in honour of Ripon’s 2016 Olympic Gold medal winning diver, Jack Laugher.