A young artist from Harrogate has been nominated for a national award after raising £20,000 for disabled children across the world.

21-year-old James Owen Thomas is an environmental artist who turns unwanted material into something creative and unique.

And after producing art that raised £20,000 for The Caudwell Children’s Charity as part of their 20th anniversary, James has been nominated for a National Diversity Award.

He has been shortlisted in the ‘Positive Role Model Award for Disability’ category.

Talking about the nomination, James told Your Harrogate:

“It’s really wonderful to have heard this news. It’s been such a great feeling to give something back to disadvantaged and disabled children.

“So to hear and know I’ve been recognised for that is really wonderful, I’m really pleased.”

The Caudwell Children’s Charity has helped over 50,000 disabled children during its 20 years – including James himself.

He was diagnosed with autism at the age of three and benefitted from the Staffordshire-based charity, who work to provide diagnosis, equipment, services and support for disabled children.

“I used to be an early beneficiary of the charity and they asked me if I would consider creating a unique piece of work that would reflect the history of their charity.

“I made it out of 20 individual canvases, one to represent each year along with the quote from John Caldwell, the founder of the charity, that every penny raised raised through his business Phones4U would go back into the charity.

“So on each canvas I put a penny in for each year that the charity has been around for.” 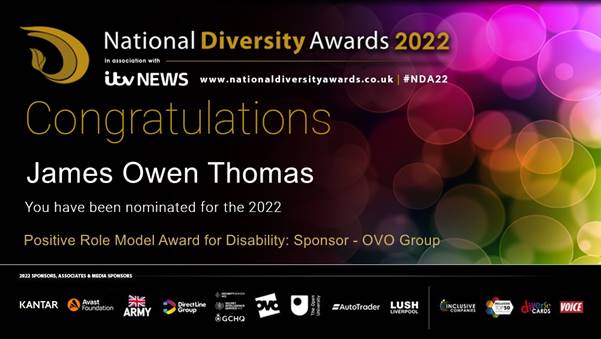 Pictures have always played an important part in James’ life as a means of communication and expression.

And his art aims to highlight issues of the environment and single use products as he turns things discarded by others into a medium for expression.

He is also a Tree Council Ambassador who became a COP26 One Step Greener Ambassador in 2021 when he received an invitation to Downing Street and to COP26 in Glasgow.

A letter from the Prime Minister recognises James’ artwork in relation to COP26 and to all the fundraising James has done through his work.

“It was a great surprise when I received it because not only was it about COP26 but he also recognised the fundraising that I’ve done so it was a really great honour to receive that and a great privilege to receive such an important letter.”

James has been nominated for a National Diversity Award and needs your vote before Friday 20th May.

Speaking about what it would mean to win, James told Your Harrogate:

“It would allow me to not only continue my work but also help realise that more can be done to help the diverse world that we live in.

“More can be done to achieve through autism, it’s not just a disability but a different kind of ability. It doesn’t have to be something that is portrayed as negatively as it has been.

“As I realised the number of challenges that come with the condition, there are also positives as well.”

The 21-year-old is currently working alongside the Alzheimer’s Society in which he plans to provide artwork for their Christmas Carols campaign.

The work done by the charity is something that is important to James after his grandmother, who lives with vascular dementia, moved in with his family during the first lockdown.

Read James’ full nominee profile and give him your vote here.