The Duchy Hospital in Harrogate is teaming up with a Ukrainian doctor practising in the UK and his hospital operator to deliver urgent medical supplies to Ukraine.

Alongside Sergey Tadtayev and Circle Health Group, the Duchy will work to deliver over 110 tonnes of urgent medical supplies in response to direct requests from Ukrainian doctors.

The hospital has worked with the Ukrainian doctors’ union (Ukraine Medical Association) and the British Red Cross to identify needs in war-hit hospitals, whilst Sergey has galvanised his Circle colleagues to gather 10 truck loads of vital supplies from across the group’s national network of 53 hospitals.

Upon receipt of the supplies, the hospitals then distribute a portion to local community hospitals in a hub and spoke model.

“My heart breaks for my fellow doctors back home who are fighting heroically to care for the sick and wounded – even as the bombs continue to fall.

“Hospitals are struggling to get basic supplies because transport and manufacturing have been so badly disrupted, so I knew I had to do something to help.

“Moving 100+ tonnes of medical supplies between hospitals separated by thousands of miles and several borders has been an incredible team effort, and I have been overwhelmed by the generosity of my colleagues at Circle Health Group.

“They are moving heaven and earth to get help to those who really need it on the frontline, and I am humbled by the solidarity and support for my homeland.”

A team of volunteer hauliers from the UK, Poland and Ukraine have made the journey on a weekly basis since 15th March, navigating their way through war-torn regions and areas of conflict to reach the hospitals in Kyiv, Kharkiv, Mykoliav, Odessa and Lviv.

The latest delivery arrived at a Kharkiv hospitals on Easter Sunday, containing £185,500 of medical equipment.

Circle Health Group have committed to continue the weekly delivery programme for as long as the supplies are required.

The latest delivery, which departed the UK on Wednesday 13th April and arrived at a Kharkiv hospitals on Easter Sunday, contained £185,500 of medical equipment loaded on 35 pallets, including 5 ventilators, an operating table, patient monitors, suction tubing and chest drainage sets and sterile gowns.

At The Duchy Hospital, senior ward nurse Sue Barlow organised a cake sale in the reception of the hospital. In total, Sue’s efforts raised £1,150 towards the hospital’s target of £7,000.

Theatre practitioner Rose Salvador also organised the collection of non-perishable food items which were organised and packed at a local warehouse alongside Emmerdale star Emma Watson.

And staff and doctors took up the challenge of cycling continuously for 12 hours to raise yet more money towards the group target. In total, the hospital’s efforts have raised over £2,000 towards Circle Health Group’s target of £1 million. 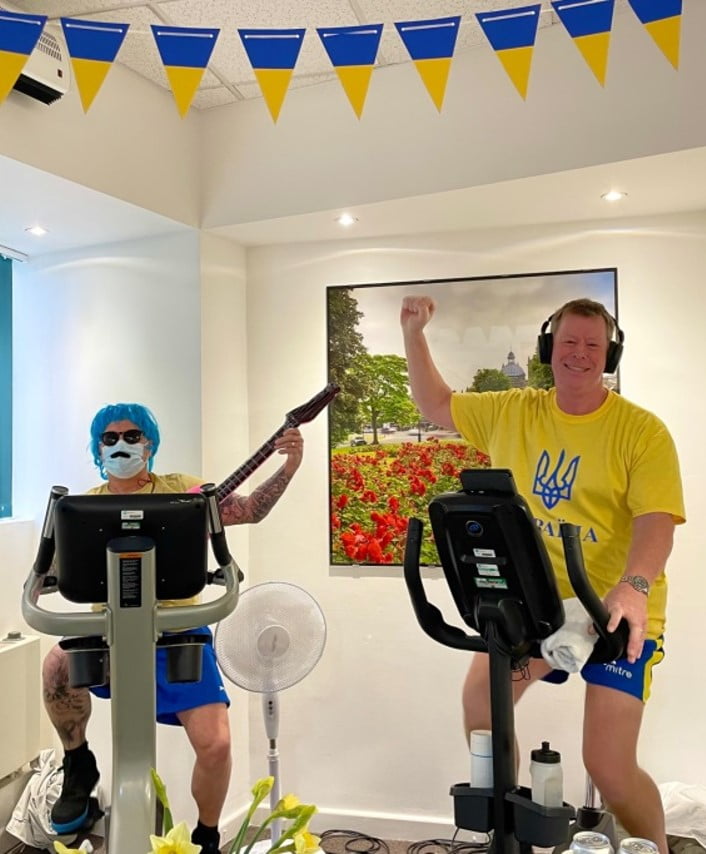 The Duchy Hospital staff have done their bit to fundraise for the appeal.

“We’re so grateful to the hundreds of people across the country who have contributed to this effort, from staff to partners and suppliers, and the brave drivers who have put themselves at considerable personal risk.

“It’s hard to know how to help in the face of such enormous suffering, but as a hospital operator and one of the UK’s largest employers we knew we could provide unique support for hospitals caring for the sick and injured.

“Working directly with Sergey and his Ukrainian medical colleagues we are able to understand their exact needs and get targeted aid to them directly in some of the most difficult parts of the country.”

Sergey’s appeal and The Duchy’s efforts have received an extraordinary response from colleagues, with around £1.4million worth of medical supplies and funds donated by Circle Health Group hospitals, staff and suppliers to date.